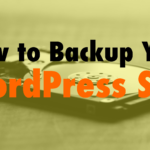 How to Backup Your WordPress Site | EP 689

How to Backup Your WordPress Site

00:32  David Blackmon: Today we’re going to talk about something super important. It might be one of the most important things that you can do for your WordPress website. And we’re going to discuss, how to back up your WordPress website. Now why would you want to back up your WordPress website? Well there’s lots of reasons but the main reason is, in the event that something happens and your website crashes or or something happens you can get it back quickly. So when you think about WordPress, WordPress is a bunch of different pieces of software plugins maybe even a theme a child theme and they’re all working together and they’re all potentially created all of these products are created by different companies, so they’re constantly having to make sure that they are compatible and they work together, and guess what? They don’t! Always get it right you know sometimes we’re human beings errors happen and sites crash and you need to be able to get your site back quickly. So backing up is one of the most important foundational things that you can have in place with your WordPress website, and there’s a few ways that you can go about doing this. We’re going to discuss three of them i’m going to talk about the first one and then Tim’s going to dive in and tell you about the last two and stuff. So first one is what do we do we WordPress plugins easy-peasy you know. It’s like hey find a backup plugin that you like there are many out there all in one WP Migration is a good one Updraft Plus is another good one Backup Buddy is another good one and probably one of the oldest ones around. There’s a new one out that we may do a plug-in highlight on in the near future i’m not going to give its name right now but it’s in the repository it’s got five-star ratings across the board and they’re a new player in the backup game and they do backups and migration, and i will say this a lot of these plugins will do both. They will do they will back your WordPress website up completely and they will also migrate it for you if you need to migrate it and stuff. So they’re really good tools typically those two go hand in hand one last thing that i want to say the differentiation between you know these plugins a lot of them have free and paid versions so if you’ve got a small brochure website you’re probably going to get away with using the free version , and you’re never going to have to pay for the premium version because it’s based on the size of the site, and how that you know how big that site is. And they’ve got to move it and migrate it and stuff, so premium versions typically are two gigs and over if your site is a two gig or oversight you’re probably going to have to get the premium and you know, the free version sites that are two gigs and less and they’re easy. I’m going to tell you, you install the plugin you hit backup and it captures a backup of your entire website zips it up in a zip file, allows you to store it wherever you want to store it. You can set it up to auto you know, save to a google drive or something like that or you know, and then reinstalling it is that simple as well. It’s importing this backup and boom your sights back! So super big super important. Tim’s probably going to say a bunch of stuff that i missed so let him talk. Go Tim.

Yeah no that was great David. Um yeah i i’m just going to share a quick story, because um if you’ve been using WordPress long enough, you probably have some sort of horror story on why you’re crazy uh anal about backups and and backing up often and that sort of thing. So for me, my story was and this was back a little over 10 years ago, i was working for a small software company, i was the marketing coordinator and i had built rebuilt the company site. The company had like four different sites i rebuilt the main site on WordPress and everything and shortly after that happened i or shortly after i had built the site uh the hosting company that all the sites were hosted at had some sort of outage servers crashed everything. So four sites gone right? We thought that they had backup solutions in place and it was a little bit of misleading on their part, and so they didn’t. They didn’t have backups in place, and so um luckily i had backed up the main site using Backup Buddy which is pretty new at the time. And so thankfully we were able to get the main website back online very quickly and then we had some old like development versions of the other non-wordpress sites. Uh and they were you know outdated had to be up to it was a huge huge mess. And so all that to say backing up your website should be as second nature as drinking water when you’re thirsty. Um it’s just something that you have to do! And you can’t always just trust that it’s being done at the hosting level, and i’m going to talk about that next in a second. And so taking backups into your own hands and then also testing those backups So David mentioned backups are also able to do migration, so a backup plug-in can also do a migration and and so what you can do is you can migrate it to a local install or a dev install a subdomain whatever and test it, make sure hey everything actually works you know. You want to make sure that the backup doesn’t fail that it’s actually backing up all of your content files. And that sort of thing because it’s so important. So that brings us to option two of backing for WordPress website and that’s at the hosting level most hosts these days have backups built in and they’re automatic. Now i mentioned you don’t want to just purely rely on the host the more reputable. The hosts and especially if they’re WordPress focus then chances are it’s going to be fine,  but it’s not a bad idea to have some backup redundancy so you have hosting level backups, that happen every night and maybe you install backup plugin and do it weekly right just in case. Something happens now a good host like for example WP Engine Flywheel uh David-based hosting i’m assuming does backups on separate servers. So if the main server goes down the backup server that’s storing those backup files is safe. Yeah and so um that’s kind of uh you would think would be a no-brainer for hosting company, but i can tell you so many it’s like oh yeah we have backups but then the backups are just on the same server, so it’s like almost pointless if the server crashes. So that’s that’s the second level is is uh using a good solid host that has backups built in. And then the third way that you can back up. Now i would say that these days you don’t really need to worry about this, but it’s not a bad idea to learn how it works and that’s to manually back up your site. So the backup plugins will take all of all the the parts to your website and zip it all together and then they have scripts and stuff for restoring it and putting in the right place and stuff. But you can back up your site manually which is basically downloading the different parts of your website separately. So for example you can go into uh phpmyadmin on at your host and download your your mysql database, you could go log into via ftp and download all of the files. And that’s essentially all you really need. You could also from WordPress export all your your content with the WordPress Exporter, or you can go into your page builder and export all the layouts right? Go into the plugins export the settings file so there’s lots of different ways you can do that. Now i mentioned you probably don’t need to worry about it if you’re doing the first two. But it’s it’s learning how it works so that hey you know what these layouts i worked really hard on i’m not going to necessarily manually back up every part of my site but i do want to manually backup this just in case i need to restore just the layouts. And so you have that option. But yeah this is a little bit of a longer episode because backups are incredibly important, so make sure you’re backing up your site. Make sure you test those backups and it’s not a bad idea to have some redundancy built in and backing up multiple ways.

09:02 David Blackmon:  Absolutely and what i will say, one last thing what we do. Typically is we will keep a certain number of the latest backups so which is also just another layer of redundancy. So i think we keep four our latest four backups in you know, that we have access to in the event that something happens and stuff. So awesome.

09:42 Tim Strifler: And i do want to say, Divi Space Hosting is not just for Divi, but for any page builder or really any WordPress website. But i know you guys have built it out specifically for Divi and other page builders i’ve heard nothing but phenomenal things. So if you’re in the market for a new host i’m going to shamelessly plug David’s hosting company Divi Space Hosting, check it out, very very fast and reliable but also very affordable too so..

Previous podcast Do I need to Use the WordPress Menu System? | EP 688
Next podcast How Long Should Your Blog Posts Be? | EP 690