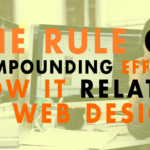 The Rule of Compounding Effort How it Relates to Web Design

00:50 Tim Strifler: Yes. So compounding effort is basically the concept of what you do today isn’t necessarily starting over if you’ve done, you know, the work and everything yesterday and the day before the day before. And so, um, rather than trying to explain that with the definition, let me give you an example. So you might know someone that’s been in business for a while doing web design with clients and stuff, and they just have so many, uh, internal, um, referrals coming in. Uh, consistently it’s like, how the heck do they get so many incoming referrals? And so, um, the reason why is because it’s compounding effort, they’ve been in business for years, they’ve built relationships, they’ve done all these projects. And so they have a bunch of happy clients and stuff. And so it’s not like they started over every year. After every new project, no leads, uh, you know, that they had, uh, before and everything are, are starting to come to fruition. And so, um, that’s kind of what we’re talking about here. And so for a lot of new businesses that, that are. You know, trying to get clients and build a client base and get projects and stuff. It’s it might seem like you’re pulling teeth, just trying to get that first project and you get the first project. And then it’s like, okay, it’s equally hard to get that second one, but when you stick with it and you’ve been doing it awhile, that effort starts to build on itself and you might reach out to people and build a relationship, you know, over here, and then they’re not ready for a website now, but, uh, you you’ve built that connection.  And then you do the same thing over here and over here and over here. And then. Later down the road, those start to come to fruition actually become paid projects. And it’s effort that you did, you know, over a long period of time, that compounds in order to, uh, you know, make you really successful the longer you’ve been in business.

02:40 David Blackmon: Yeah. And I, I relate this to early in my web design career. I wanted something. You know, to use that, that, that kind of the role of compounding effort. And I relate mostly to like service and maintenance agreements and stuff. So, um, you know, I basically wanted a, I had a goal of a specific revenue that I wanted to hit, and I knew that it was going to take. Some time to build that up and effort, and it wasn’t going to happen overnight that it was going to be what Tim was talking about. I was brand new. I was in web design and I would go out and I’d get clients. And the next thing I had to get another client and then I had to get another client and it was always about me going out and pursuing the work. Whereas when I got established and you know, not only established on the web. And where people could start finding me because Google saw me as an authority in my local area in web design, but also customers, existing customers started referring me and, you know, work started to come in. It didn’t totally, you know, rely on me making a phone call, walking into a business. I all of a sudden started getting these other. You know, streams of, you know, um, pay off basically of the work that I had done initially. And I, what I really liked about the service and maintenance agreements was that. I wanted to, I had a goal to just sign up a hundred maintenance and service agreements, you know, uh, which basically allowed me to just maintain the main core functionalities of their website. Um, and something that I felt that every small business even could afford. And that was very important for them to do. But over time, you know, if I could get a hundred clients in the stable, pay me X number of dollars, a  Year that I would start the year off with a guaranteed revenue. And that took time to build up over time and stuff. And that’s, you know, this rule of compounding effort and stuff, it applies in so many different areas and stuff, but, uh, and there’s several ways that you can use it in web design. Most people don’t think about, you know, The hard work that they’re doing today and how’s it gonna pay off in the long run and stuff. And Tim and I teach a lot of this stuff and our Divi business expert course, which yes, it’s focused on Divi. Um, because Tim and I are, you know, we’re all in with WordPress and Divi. We were product creators for the Divi theme. But it’s very business focused and you could transplant Divi with, you know, if you want it to, we recommend Divi. We want, we think you should be using it cause it’s easy, but you could take the business principles from that course. And we talk a lot about this compounding effort and stuff in that. So yeah. Yeah. And the, the maintenance and service agreement. That’s another perfect example of the compounding effort at play.

05:36 Tim Strifler: Yeah. And the, the maintenance and service agreement. That’s another perfect example of the compounding effort at play. And it’s hard when you’re a web designer, because it’s like, you’re not really thinking of the compounding effort and, you know, the fact that. You’re going to be building something that’s going to be worth, you know, a lot more later and have a lot more things happening down the road. It’s like a lot of times you’re just thinking about that next project, that next project and stuff, because you’re trying to, you know, pay rent, pay mortgage or whatever. And so you’re just trying to think about that next paycheck. But, um, if you can kind of look at the big picture and zoom out a bit and, and like what David was saying, you know, with the maintenance and service agreements and wanting to, you know, have a hundred maintenance clients. So he’d be starting the year with. What was it? A hundred grand at the time?

06:24 David Blackmon: Yeah. Well, mine at the time was I wanted to, you know, make $1,500 per customer. So start the year off with a hundred, 150,000 a year, you know, and it, my goal was it was going to be a five year plan. You know, it would take me five years to get there, but once I got there, you know, It was like, okay, well, I’m going to start off with a six figure salary before I ever even close the first web design contract. And I actually hit the six figures, you know, earlier than five years. That was just the goal that I set myself and stuff. And that’s, that’s kinda where I wanted to go and stuff. So, yeah.

07:06 Tim Strifler: Yeah. And I think it’s important to have that big picture mindset because yeah. It’s like a lot of times when you, when someone’s a new in business, it’s like, you’re, you’re only thinking about that short term. And sometimes you have to, cause you have to, like I said, you have, you have bills to pay, but um, if you can kind of, yeah. Look at that big picture. It’s it’s it’s worth it. Absolutely. Especially when you combine it with the things we’ve talked about, the last couple episodes with consistency and all of that, so..

07:31 David Blackmon: Awesome! Well tomorrow, we’ve got another great topic in episode six 40. It’s a doozy. It’s a great one. How turning down certain web design projects can actually make you more money Tim, until tomorrow. We’ll see you then.

Today’s Plans Got Destroyed, and That’...