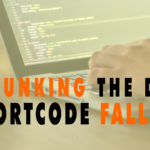 00:28 David Blackmon: Hey everybody, welcome to another episode of WP The Podcast Brought to you by WP Gears. I’m David Blackmon.

00:37 David Blackmon: Today in episode 632 we’re going to talk about debunking the Divi Shortcode fallacy, you who may have been around the Divi community. Since the beginning may remember, a blog post from our good buddy Chris Lima who he didn’t say to kind of things about Divi at the time and his main argument of why Divi was, you know a theme that you wouldn’t want to go with, was because “if you chose
Divi you were stuck with Divi forever”,  and obviously you know it’s the number one WordPress theme in the world now. And has been for a while
and it’s totally not not 100% correct or true, but his blog post got a lot of traction, and still ranks very highly. Today and Tim and I are gonna correct some of this myth, and we’re gonna debunk some stuff. So Tim go..

01:31 Tim Strifler: Yeah, so David’s right. There was that article and it was I don’t know if it still is, but at the time for awhile for a couple of years if you search Divi it was on page. One like halfway down the page with the title “If you use Divi it better be forever”  and so the where that’s coming from is the fact that Divi the page builder is built on shortcodes. And so shortcodes of something’s been in WordPress for a while and if you’ve ever installed the plugin that uses shortcodes and then maybe you uninstall the plug-in but you forget to remove the shortcode, you
basically see on the frontend an empty shortcode right you’re seeing the actual shortcode with the brackets and stuff rather than what’s supposed to be shown in its place. And so because Divi is built on shortcodes if you uninstall Divi it’s true, that you will see all the Divi shortcodes and you have to go in and clean them up or whatever. And so that’s the argument and it gets brought up a lot people will whatever and so that’s the argument. And it gets brought up a lot people will say like “oh yeah I won’t use Divi because of the short codes you know I don’t want to be stuck with you know with Divi and blah blah blah”… However while that may be true it may be. It’s true that if you uninstalled Divi and you don’t you know change anything, you’re gonna have all these shortcodes. However every single page builder works in a similar way maybe not with shortcodes but if you for example if you go and you install Elementor and you build a website with element or and then you decide “you know what I don’t want to use Elementor anymore,  you know it’s buggy” or you know whatever… and you uninstall element or you’re not gonna
see shortcodes. But what you are gonna see is a very broken garbage looking website and so all of the the styling and layout from element tour is there, or I’m sorry, all the styling layout is gone. And all you have is the empty content and it looks like a website that was built in 1990 before CSS existed. So you don’t see shortcodes but it’s still a broken website and so you still have to start over. And so just like any other theme or page builder if you stop using Divi you’re gonna have to redesign and that has nothing to do with the fact that Divi uses shortcodes. It’s that if you build and design a website built on the controls and styling of a certain theme or page builder and then you switch to something else you’re  gonna have to redesign. And so it’s a big fallacy that that Divi has short codes that will you know that that’s a limitation basically is what we’re trying to say here. And so I mean I’ve done these tests myself you know… I installed Beaver Builder I installed Element or i used one of their built their default layouts one of the layouts that they provide and then I deactivated the page builder and what I saw was a garbage looking website that needed to be redesigned. And that’s what you get when you take a WordPress theme or a page builder or whatever and then you deactivate it. You’re gonna have to rebuild and so that’s kind of the the moral the story here that it’s no different when you’re using Divi or you’re using whatever other theme you’re gonna have to start over if you decide to switch themes or page builders.

04:38 David Blackmon: Yeah I totally agree. I mean regardless of you know which theme you use in WordPress or you know bootstrap your own and custom-built your own thing if you go to a new website and change you’re gonna have some work period bottom line. It’s not going to ever be “click of a button migration”,  boom! “everything is beautiful and amazing”. I don’t care what theme you can have the most simplest  theme in the world – the simplest theme in the world. There’s going to be some work that’s going to have to go into you know making, it look the best way that it possibly could look. So yeah I agree with everything Tim said and I hope we’ve answered your question and debunked the
Divi shortcode myth because it doesn’t matter what theme you got, you know.  I don’t know if you know I I don’t know really why some people chose to jump on that bandwagon. But you know what it hasn’t slowed down Divi from becoming extremely popular and millions of people using the theme and stuff so yeah don’t be afraid.

05:49 Tim Strifler: Ya know it that’s exactly right and I challenge anybody who’s curious to do this test yourself you know with Divi and with you
know Beaver Builder and Elementor both have free versions and the plug-in repository. Use one of their default layouts and then deactivate it and you’ll see what happens. It looks really crummy and so it’s like is that any better than short codes that are showing empty like either way you’re gonna have to redesign. Plus, with Divi you have access to some amazing Divi Plugins and an incredible community that is unmatched by any other page builder. So, “if Divi is forever” (which it isn’t more than any other page builder), than I’m okay with that. That’s sort of why I called my business Divi Life.

Previous podcast What’s the Difference Between WordPress.com and WordPress.org | EP 631
Next podcast How to Prevent WordPress Comment Spam | EP 633

7 Tools to Help You Run Your Freelance or Agency B...