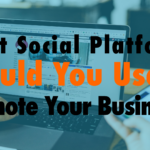 What Social Platforms Should You Use to Promote Your Business? | EP 708

WP Gears / Podcast / Business / What Social Platforms Should You Use to Promote Your Business? | EP 708

What Social Platforms Should You Use to Promote Your Business?

00:38 David Blackmon: And today in episode 708 we’re going to talk about what social platforms you should be using to promote your business. Now there are lots of social platforms out there, and by all means if there’s one that we didn’t talk about that you’re absolutely loving, because it’s killing it for your business, please let us know in the comments. Shoot us a message, an email and we’ll we’ll talk about it. We would love for you to you know what’s working best for you guys. But you know, we went with you know four that we thought were you definitely want to be on and stuff and why. And we’re going to get started today with TikTok. Uh I have recently i know i’m kind of late to the Tik Tok game, but my name’s David and i’m a Tik-tok-a-holic. I started using this platform probably about a month ago in all honesty, and what really more than any of the other social platforms that i have been on. Which has been just about every one of them. This platform was insanely easy to use, post content to which that’s huge time is money and if you can, you know get something done quickly out there to your audience. Or then that’s big secondly their algorithms seem to be a little bit more favorable than the other social platforms. Um you know because maybe it’s because it’s newer than Instagram, Facebook, all the other ones your your content gets viewed and shown to quite a few people, well that’s huge but the most important thing that i like about it is the ability to do user acquisition outside of follower subscription based stuff. And that’s really kind of where my mind went “boom holy crap this is amazing”. So obviously we’re here in the us Instagram owned by Facebook U.S. companies privacy is a huge thing in the us everybody was, and you know mr Zuckerberg doesn’t want to allow you to have access. Direct access to your audience your page your fans and stuff. You can’t see their email addresses or contact them in that way. Well TikTok will allow you to do user acquisition right on their platform. Like write in the links that you would post to your to your website and i’ll give you a just a pro tip, real quick that kind of blew my mind you know. Create a landing page have your you know subscription or you know contact form inquiry form that you want to get from a customer or something and you can put it right there in on your TikTok page it goes straight to your website, allows you to put you know, and all that information will go right into your you know email marketing platform. Whichever one you use if it’s Mailchimp or whatever and it’s just like it was like oh my gosh this is amazing um and you know Facebook really cracks down on you Instagram, all of them that they’re they’re fine with you doing the followers, but this in my opinion is where TikTok, and maybe it’s because it’s a chinese-owned company and they want to get all our information. Anyways i think they all got it anyways no matter what. So it doesn’t really matter. So i mean and it’s just been a fun platform and it’s been the one that i think my experience has been the most, i don’t know, if maybe Tim can help me with the word, but the deepest it’s it’s you can get really granular with the content that you’re actually wanting to watch. And i mean go deep with levels. And it’s it’s just like where Facebook is just they’re showing you whatever you you know and you can do some searches but TikTok is so i mean they it it is really an incredible platform and stuff that’s awesome.

04:47 Tim Strifler: Um yeah i’ve you you beat me there because i i never been on TikTok

04:49 Tim Strifler: I’ve seen people posting videos from TikTok to other places so i understand the type of content that’s there. Yeah um, but yeah that’s really interesting hearing your take on it David from a marketing perspective. Yeah it’s like it was it was amazing to see let’s continue this let’s do a full TikTok episode David.

05:10 David Blackmon: We will episode and how you can utilize your you know, utilize it for your business and stuff. We’ll promise to do that. Number two on our list, and these aren’t in any order by the way. These are just you know this isn’t the best one the second the best blah blah… Next on the list that i’m going to talk about and then just going to throw it over to Tim is Instagram. Instagram obviously if you’re a designer and you’re building websites it’s a very visual platform, images, pictures is kind of what it’s known for. Uh it’s it’s broken off into the TikTok world where reels are really kind of you know getting really big and important on instagram and stuff. And stories and i think because TikTok overtook Facebook and it’s the number one website in the world. And more people are going to it. They’re realizing the value of the short form content and stuff. And i think where you can really maximize your potential with something like Instagram and stuff is you can show off your your clients your web design skills and stuff, the you know the designs. That you go from a design perspective, but also functionality and stuff. So um i think those two platforms are really really good and in this day and age those are two of them that you definitely really want to be on. The good news is that when you build content for one you can repurpose it on the other, because they use the same ratio of um you know a 9 by 16 frame ratio aspect ratio thank you Tim,  my brain stopped again. And yeah so and that’s you know and you can even do this on to one that Tim’s going to talk about. In Youtube is that in their shorts repurpose it to all the different platforms and stuff so go ahead Tim.

06:56 Tim Strifler: Yeah definitely oh no worries.  yeah so the next one on our list of the social platforms that you should be using to promote your business is Facebook. Now Facebook is it’s like “The Social Network” right? Uh which lately though they’ve been kind of tanking their stock plummeting and uh losing users and stuff, but it’s still really important to be a part of Facebook. However you do not get the organic reach like you would with TikTok and Instagram. So you have a business page on Facebook and you start posting content blog posts that you write or client uh projects that you finished. You’re really not going to get the uh the reach from you know if you have 10 000 followers you might have a couple hundred at the most that’ll see it so really where facebook shines is the advertising. And that’s kind of why they limit your reach organically because they want you to pay for it. However paying for it is definitely in my opinion the best use of paid ad dollars. Um being able to fine-tune exactly who you want your ads to show up for. On Facebook is is awesome. So i think you should be a part of Facebook no matter what, but especially if you’re planning on doing any paid advertising. And so uh that brings us to the last one the list that David mentioned uh we’d be talking about and that’s Youtube. So you might be thinking is Youtube a social platform. And it is and it isn’t uh it is in the fact that you have followers right? So you have subscribers that that will follow your Youtube channel and they if they uh sign up for the bell they hit the little bell to get alerts every time you post new content they will get an alert. They’ll get an email, they’ll get a push notification. And so it’s a really great way to build a following if you’re able to create videos consistently uh providing value for your target audience um creating stuff that people find enjoyable to watch. So and then David also mentioned uh similar with TikTok and Instagram, Youtube has the um what are they called David not real um?

09:12  Tim Strifler: Shorts exactly. So youtube is trying to capitalize on that same concept of the the short content you know, entertainment focus content that TikTok and Instagram reels has. And so uh yeah Youtube definitely you want to be on as well. Video is huge. Basically all the ones we’ve talked about video is kind of the focal point Instagram has photos too but videos is really wet.

09:35 David Blackmon: Yeah reals is what’s taken off with the Instagram and stuff, and you can get real creative with your client stuff to showcase some stuff. One thing that i want to say in my opinion if you’re if you’re stuck for time and you wanted you know if time is your important and you can only go to one of the platforms and stuff. I hate to say this but um i think i would probably choose Youtube because the fact that it’s the number two search engine in the world. Video is huge. You can do short firm form content now it’s more work than the other platforms, because of the fact that you could Youtube’s algorithms because they are a search engine thumbnails descriptions tags, you know, all of this stuff has to be dialed in. Because the competition is great. It’s much greater on Youtube then like a TikTok where you’re you know your genre and stuff and they’re blasting it out and you know the value is going to be there for you especially with backlinks and stuff like that from youtube to your website. And all that stuff is going to mean something over time so if you only have one to choose, my opinion would be probably Youtube, but in saying that it’s the most work of all of them it takes me 10 minutes video.  10 minutes boom done out yeah you know..

11:07 Tim Strifler: Yeah especially if like you’re creating if the content you are able to create is solving a problem right? Right people search to solve problems. So if you’re able to solve a problem for your target audience and create a video about it then you’re going to do really well on Youtube because people are searching to solve those problems.

11:25 David Blackmon: Absolutely. All right tomorrow we’ve got another great topic what do you need to start a WordPress business? Tune in tomorrow to find out. Until tomorrow we’ll see you then.

Previous podcast Should You Raise Your Prices for Inflation? | EP 707
Next podcast What Do You Need to Start a WordPress Business? | EP 709

3 Characteristics You Need to Be Successful in Web...